TO celebrate the 2020 Hanukkah season, the Chabad Centre for Jewish Life North Queensland will light a giant boomerang menorah at the Cairns Esplanade this Sunday December 13 at 5:30pm, and the whole community is invited to attend. Buy Photo
Rabbi Ari Rubin (right) and wife Mushkie Rubin with their children Shlomo, Dellie and Adina are excited to celebrate Hanukkah with festive traditions such as eating oily foods like donuts, giving out gelt (chocolate coins), and playing with a dreidel (a spinning toy). PHOTO: Tanya Murphy

A menorah is a candelabra associated with Jewish culture for more than 2000 years, which was traditionally kept burning in the Temple of Jerusalem.

This year the Cairns candle-lighting ceremony will feature a giant menorah constructed entirely of boomerangs. It was created with the blessings of the current elders of the Ydinji tribe, the traditional owners of the Cairns Esplanade area, representing the confluence of both Australian and Jewish cultural history in Cairns.

Menorahs, candles, and Hanukkah-at-home kits will also be distributed to attendees at the COVID-safe outdoor event.

Hanukkah recalls a victory in the year 160BC when the Jewish people drove out the invading Syrian Greeks and recaptured the Temple of Jerusalem, allowing them to re-light the menorah and resume practicing their religion after a period of religious suppression.

Cairns Rabbi Ari Rubin said the whole community, from all backgrounds and beliefs, were encouraged to join the event, which celebrates universal values like religious freedom and hope during times of darkness.

“The menorah serves as a symbol of light and hope for us today amidst the darkness of the pandemic, as it did for generations before us,” he said.

“This year, the holiday has added significance as so many around the world will be isolated at home on Hanukkah amid these difficult times.

“The menorah is a reminder that light can be brought to the darkest of times, and uniquely, at the core of the holiday’s observance is sharing the light with others who may not be experiencing it.”

Cairns’ 500-strong Jewish community will join more than eight million Jews in more than 100 countries to celebrate Hannukah this year.

Cairns’ boomerang menorah will be one of 15,000 large public menorahs around the world, including in front of landmarks such as the White House, the Eiffel Tower, and the Kremlin. 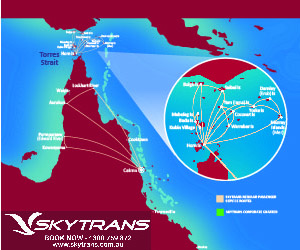